A frequently asked question is “where can you use Human Trait Recognition, the ability to read Facial Features?”  The answer to this is “Anywhere two people interact”.

As I’ve explained in previous Blogs and Posts, humans have had a fascination for faces and what they interpret from the features and expressions.  Where Micro Expressions are the unconsciously “leaked” indicators that give away what a person may be trying to conceal, Facial Features (the structure of a person’s face) can tell you how a person prefers to process information and how they are likely to behave in any given situation.

There have been many different approached to reading a person’s personality and to understand people’s behaviours.  The most effective method I have found is one I call Human Pattern Recognition.

Edward Vincent Jones, a Supreme Court Judge in Los Angeles, performed the original pioneering work in establishing the connections between facial structure and their function in terms of personality traits.  Jones noticed that although there were no particular face shapes that were likely to be criminals, he did recognise that there did appear to be a connection between particular crimes and the facial features of the people who were charged with the particular offence.  He saw similarities in the facial features of those charged with (and especially those convicted of) one type of crime and different features again associated with those involved in a different type of crime, for example crimes of passion as opposed to those of financial fraud.

During the years 1920-1950, Jones painstakingly put together a series of correlations though a trial and error process. This pioneering period of work consisted of first noticing a particular mode of behaviour, and then looking for the related phenotype or surface physical indicator for the trait which formed.  The information gathered formed the foundation for future scientific statistical analysis.

Robert Whiteside, a sceptic who have become a convert around 1950 applied modern statistical methods and research to the hypothesis that the facial features, and in particular the muscle definition, were  a recorded history of how each person prefers to think and behave.  Knowing that what you feel and think (a person’s neurology) is expressed in their body language, facial expressions and in there physiology. Regularly repeated expressions build muscles and create facial lines and groves, and these form part of the history of that person’s behaviour. When put together these features build a picture of that person’s personality.

As I’ve said, the skills of reading features and recognising traits can be used in situation, including employee recruitment, personal career selection, negotiations, team building, sales and any other form of relationship building and relationship compatibility counselling.

The basis of Jones’ primary research was for the use in Court and in particular in Jury selection which is an area that is yet to be fully utilised, especially here in Australia.

In all courts around the world lawyers try to find jurors who are sympathetic to their clients. If potential jurors have previously experienced the effect of what  the client has been accused of committing, the lawyer will want to eliminate those jurors in the attempt to remove as much negative bias as possible. 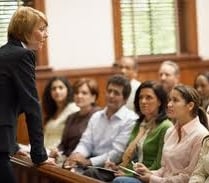 Once the jurors have been selected they go through a vetting process where both the prosecutor and the defence counsel can challenge (reject) a juror.

An example of where questions are helpful would be in the case of a murder trial, if a juror had a family member who had been previously murdered, the juror more than likely would not be unable to remain objective. It would not only affect his/her judgement, but also that of the other jurors.

Here in Australia most challenges are by observation although questioning may be possible sometimes as well. The degree of questioning (if any is allowed) depends on the conventions of the particular court and the judge overseeing the process. The decision to reject a Juror is what can be seen, for instance the defence lawyer in a rape case might reject female jurors of a similar age to the alleged victim because they are more likely to associate more with the victim.  With the lack of questions it makes the process of vetting Jurors more difficult; more “hit and miss” than in the US.

When you can ask questions you can not only evaluate the answers, but at the same time you can pick up the telltale indicators of deception and truth in both the juror’s body language and facial micro expressions.  In Australia the lawyers only have what they can read in the jurors appearance, including age, culture and sex.

This doesn’t put them at the same disadvantage when they can recognise and understand personality traits. Being able to look beyond the obvious such as age and sex, lawyers can begin to understand more fully how the individual juror might react towards the defendant and toward the other jurors.

The traits give away who are the leaders in the jury and especially those who likes to be in charge, who will more likely be sympathetic to the victim or the accused. Who will make their minds up quickly and who among them will sift painstakingly through all of the evidence.  Those who will accept a well delivered argument and those who will question everything that’s said.

I’ve covered some of these features and their traits in my eBook “The Face – How to get your ideal career to match your personality” which you will find on Amazon at www.amazon.com/dp/B006B5SB0O and in Google Play at https://play.google.com/store/books/details/Alan_Stevens_THE_FACE?id=a3xZAgAAQBAJ

Once the case starts lawyers in the US and Australia then have the same advantages and opportunities, but that’s a topic for another post on Micro Expressions and Body Language.