Do You Fear What Others Think

Why you shouldn’t let your fears control your life

In all of the years profiling people I’ve never had anyone who has voiced a concern around the way I read people. Yes, I’ve had people question how accurate a trait analysis with Visual Trait Profiling may have been. However, they have always agreed with me when I’ve presented them with scenarios of how they will react in different situations. As I said I never had anyone with an issue… that was until September last year. I owe a thank you to this guy because he presented to me a great opportunity.

I was attending an business networking event in Sydney as the guest speaker. Instead of just a talk, the event was organised as an interview session. We did it that way so that people could ask questions very early in the piece. In this particular case the room had been setup in a large circle so everyone could see each other. Standing at the rim gave me the a clear view where I could profile the whole audience. And for the audience it’s a lot less intimidating than me looking down at them from a stage. It also makes it easier for people to ask their curliest questions.

After a quick introduction the questions started flying; questions about where the skills were used, how accurate they are, the success I’ve had, who had I worked with and taught, the results they achieve. Watching the audience’s body language and facial expressions, I knew everyone was getting right into it. All except one gentleman who I noticed becoming more and more agitated. I gestured to him to ask his question and everyone’s jaws dropped when he launched into a tirade.  “What a load of rubbish”, “who did you think you are”, “where is the empirical evidence”, “had it been peer tested by psychologists”. And it went on. 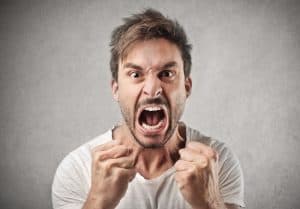 By now I’d already moved to the middle of the open floor to make it easy for him to let it all out. Finally he stopped on the question of “how many people had been tested”. When I told him how many thousands and over how many years his answer was “that’s not many” and he relaunched his tirade.

When you consider that testing on lotions we slap on our skins and foods and potion we ingest are done on far fewer numbers it was obvious…this wasn’t his issue at all. Once I realised what he was really saying I had nothing but compassion for him… I patiently waited for him to draw breath so I could answer his real concern but he bolted for the exit instead.

When you’re listening to someone you need to focus on what is behind what a person is saying and not just the words that are spoken. It was obvious that what I had said was not the real issue. His anxiety, his comment on the research numbers and his eventual running out of the room proved that. His fear was, if I could read people by just looking at their facial features, just how much was I picking up about him. He was terrified that I saw him as he saw himself. The reaction from most people when they first meet me is how much am I picking up. Can I read your inner thoughts? No! It’s a misplaced fear; I don’t read minds and I don’t know what your thinking. However, what I can detect is how you go about thinking about what your thinking about. He, and you for that matter, shouldn’t worry whether your Facial Features defining your character. They don’t. Two people with similar features will think and act similarly but one could be a saint while the other a sinner. (Your character is more defined by your body language and micro expressions over a period of observation, but that’s another story).

What is more important are the following three points; points you should remember:

Strengths show what you are good at and the downsides show how you’ll react under stress.

No one person’s traits are better than anyone else and everyone does have a gift in one form or another. Appreciating your traits though helps you find the careers, hobbies and sports that suit your personality; the tasks you’ll love to do. None of it is judgemental (unless you’re judging yourself).

I owed my thanks to this gentleman. He gave me the opportunity to explain to the rest of the audience what really happened and why they should show him compassion, and especially why you should embrace Visual Trait Profiling.

The real issue for this guy was

You see we all have two distinct images. The image that we present to the world (the way we want others to see us) and the image we have for ourselves (and the one we don’t want others to see).  They are generally vastly different to each other, and this was especially the case for this guy. He presented the first image to the group. Then when I was introduced and the audience was told I was going to demonstrate the skills, he panicked. He worried that I saw him as he saw himself. His fear wasn’t that Visual Trait Profiling didn’t work. His fear was that it works..and worked brilliantly. The more he worried about what I was picking up the greater his fear grew, hence the petulant outburst. What he didn’t realise was that in that moment he had a far lower impression of himself than I did.

I’m seeing both the upside and the downside of your traits at the same time and I’m seeing you in a far better light than you see yourself. I’m seeing the strengths and the weaknesses at the same time. Not just the weaknesses. From your strengths I’m seeing the gifts that you have to offer; where you and I can get the best out of our relationship. In the downside I recognise how you respond under stress and the issues that would hinder your performance and our relationship. If he hadn’t run away he too would have understood his strengths and had cause to feel far better about himself.

Why do I profile people?

So they can be the best they can be and they can push a few more self imposed barriers out of the way.