I’ve got a bit of a reputation of playing games with scammers to help bring them undone and a few weeks back I came across a Facebook page in the name of Gina Rinehart.  There were a number of red flags that raised me suspicion and I thought I’d test it out.

Although the site  only started on August 3 this year (2013) that wasn’t in itself too suspicious.  It would have been suspicious if it was as site with an attractive young women seeking out older (gullible) men, but for many older executives (male and female) they are only now just seeing the benefits of being socially connected.

The give away though was the “Started Working at” and “Left Job” at mining Tycoon. 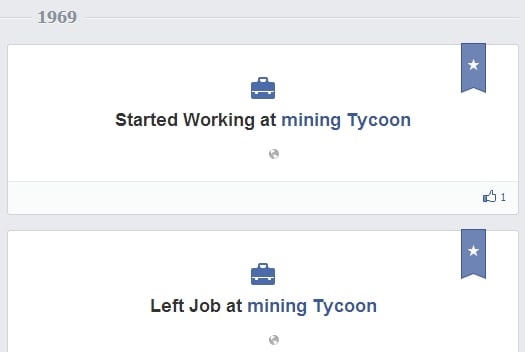 I’m not here to educate scammers so I’ll leave it up to you to work it out for yourselves.

Then there were the rapid succession of changing profile pictures. A rush to get some content on the page. Quite a few LIKES and some comments, but none every from Gina.  You open a social page but don’t engage in social interaction? 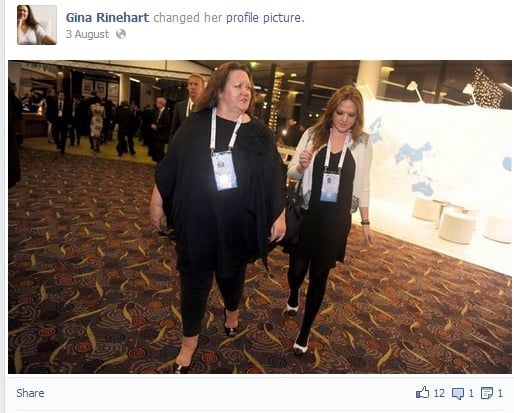 Look at the presentation of the site

No banner, bland and drab. Not what you’d expect from some on in her position.

Check out the contents – Photos and Posts

There is only 1 photo. A photo that was posted by someone else reminding Gina of their meeting. Yes, I’ve blurred his face and removed his name because he thought he was sharing it with Gina.  Every photo of Gina is on public display on the Internet. Just do a Google search for Gina Rinehart Images and you’ll find everyone of them that appear on the FB site 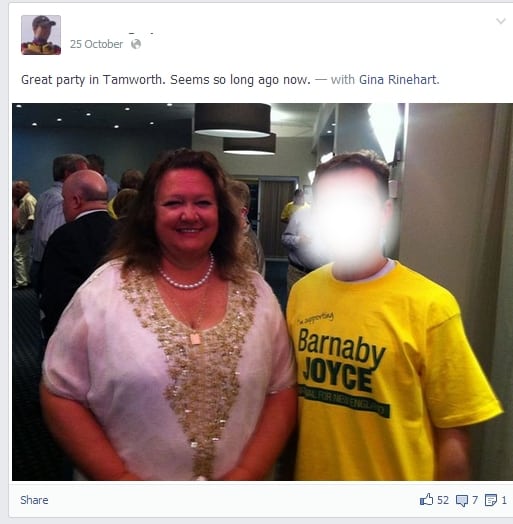 Another obvious indicator…..52 LIKES and 7 Comments and not one comment from Gina

In fact if you have a look at the site you find post after post and everyone of them posted there by other people. In not one of them will you find a comment from Gina

The only post to be put up by Gina appeared around the time I messaged her direct, asking her for her interest in supporting my research projects.

I wanted to see what reaction I could get out of her. 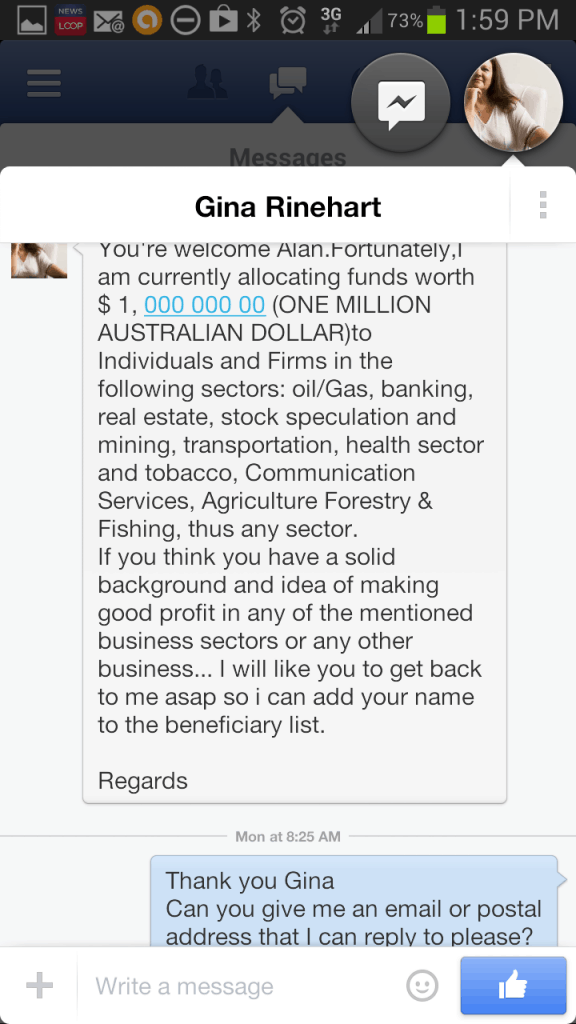 I responded to test her out and got this 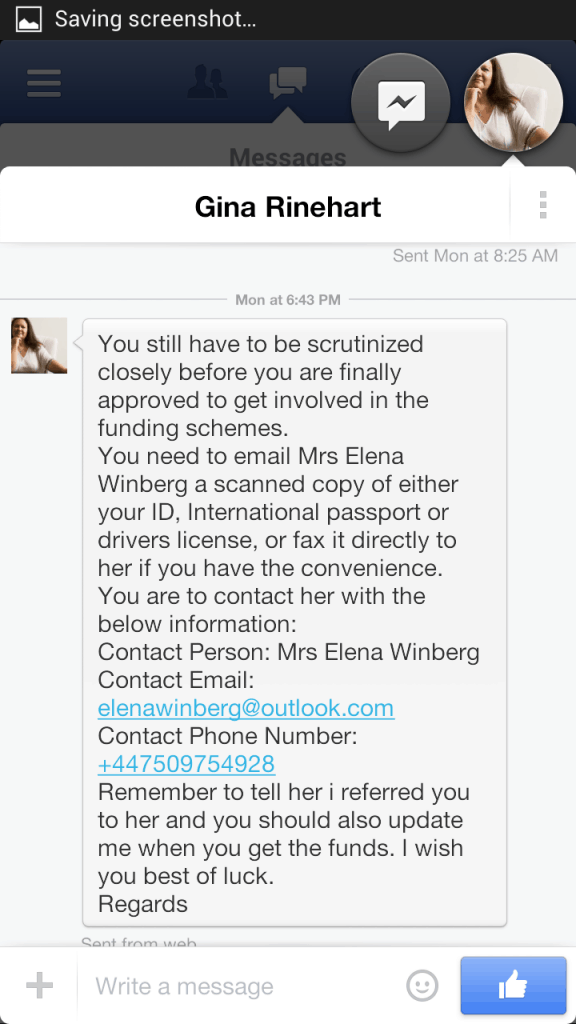 How many things wrong can you see?

I ran out of fingers to count them all, but here is a couple. 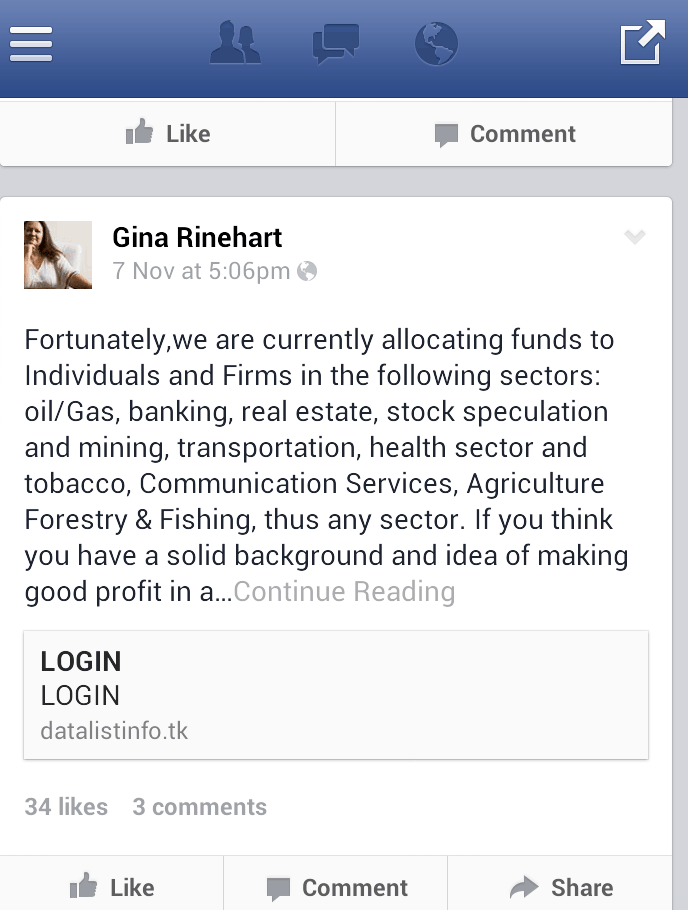 The wording in the post and the message I received are an identical cut and paste of each other.

The LOGIN feature was a immediate give away. The domain name and the .tk should have sent every friend on the site running for cover.  The domain extension .tk is the tiny island nation of Tokelau located in the South Pacific, population 1,268 but a massive web presents.  .tk is the 3rd most popular domain code and would be overrun with scammers

So what does the Real Gina Rinehart say.

After working it out for myself I contacted Gina’s office who told me that it had nothing to do with Gina.

So if you’re you were friends with the Gina Rinehart site, are you still now?  By staying on the site you’re telling these crooks they have carte blanche to rip people off.

A number of people I warned about it said they thought it was a scam but stayed friends with the site. They live in hope that it’s not a scam and that Gina will recognise them.  Don’t feel bad if you’ve been sucked in. You’re in good company. The site has coaches of all types, motivational speakers, presenters and trainers, business leaders and politicians and none of them were any the wiser. Hopefully they are now.

Do your due diligence and check things out for yourself and if you want to know more about protecting yourself …LIKE and Follow my FB business page on www.facebook.com/ReadingFaces.